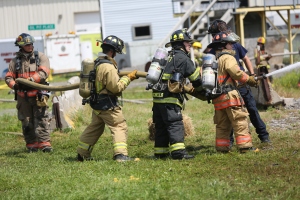 U-Crest Volunteer Firefighter Jordan Pocobello is recognized for his positive attitude and helping others.

Jordan Pocobello, a volunteer firefighter with the U-Crest Volunteer Fire Company in Cheektowaga NY was recognized for his positive attitude in helping others overcome their challenges during the graduation ceremony for the Erie County Firefighter 1 Boot Camp held July 17, 2015 in the Erie County Emergency Services Training & Operations Center Auditorium.

In his this nomination for Pocobello, Lead State Fire Instructor Jim Zymanek wrote :

“For this recruit, the volunteer fire service is a family affair that includes his father, his brother, his uncle and two cousins – but to him it’s about more than just building on the foundation that’s already been laid for him. The word ‘service’ is his reason for joining the v

olunteer fire service. He says he joined because he loves to make an impact on people by helping them through some of their toughest times. Joining the fire service is a conscious choice that everyone has available to them and he feels it’s the best decision he’s ever made in his life.

This recruit was chosen for this award for his ability to maintain a positive attitude while working hard to overcome his own personal challenges, all the while always offering to help others overcome theirs. His work ethic and attitude toward serving others is “worth investing in.”

I have chosen the recipient of the 2015 The Robert E. Newell Memorial Firefighter 1 Boot Camp Recruit of the Year Award to be Jordan Pocobello from the U-Crest Volunteer Fire Company here in Cheektowaga.”

Pocobello could not be present at the ceremony due to a family vacation but later received the award presented by Orchard Park Volunteer Fire Company Captain John Newell, the youngest son of Bob Newell, for who the award is named.

Jordan was one of 33 new volunteer firefighters from across Erie County to graduate from the time and energy intensive two+ week basic firefighter training.

This award is aptly named after Robert E. -Bob- Newell: a great educator, trainer, mentor and friend to literally thousands in a firefighting and instructional career that spanned almost 40 years.

With State Fire Instructor Tom Partridge, Bob helped create and taught the first three Firefighter 1 Boot Camps before his untimely death in 2008. Also an Erie County Fire Instructor and volunteer firefighter, he did more for his Village of Hamburg Fire Department and our fire service than we may possibly ever realize.

Bob Newell loved to teach and students loved to be taught by him, young and old, experienced and green. There aren’t many fire service leaders in our area who never took a class from Bob Newell sometime in their career. Bob was most in his element when in the classroom or on the training ground. He exuded pride in training his replacements and took great satisfaction in teaching new recruits.

In addition to all of their requisite skills, Bob taught them discipline and teamwork. He taught them to respect their officers, their peers and themselves. He taught them that the road to leadership begins by being a good follower.

He was a great judge of character and could quickly do a size-up on someone to determine if they were a good “investment” of his time and energy. If he saw the smallest glimmer of hope for your success, he was “all-in” and invested everything he had in helping you reach your goals.

Bob was firm but fair and was quick to put students back in line when they stepped out. He was never shy about offering a verbal kick in the pants where appropriate. His honesty was at times cutting, equaled only by his caring for others.

Bob taught many valuable lessons that way. He never, ever, allowed anyone to fail themselves. Bob was adept at applying a gentle nudge just at the right time to boost his students’ confidence when they doubted their own capabilities. That was Bob – always testing people to be their best – as he knew we were capable of.

His greatest quality was the ability to impart grace, always leaving the door open for someone willing to change his attitude about them. And, if you “saw the light” – there wasn’t anything he wouldn’t then do for you.

He taught his students about life in general, life as a firefighter and the importance of loving this job and all that it has to offer, good and bad. He was always the one pushing us, always exploring new technologies and embracing new techniques.

Bob Newell was a good firefighter, a great instructor, a class act and a generous friend. His dedication to his family and the fire service were unmatched and his legacy will live on for years to come. Someone we should all strive to be.

That’s why we’ve named this award after him, to honor his memory and to recognize those who, if he were here today, Bob Newell would size-up and say that they were: “The One Worth Investing In.”